The power of the Gospel: Stephen's story

Stephen came to Bible study that Sunday morning because it was one of three places the terms of his probation allowed him to be.

Without making eye contact, he plopped down on a green loveseat and glared at the floor. Jason Fletcher, who was leading the Sunday school class for college students and young adults that morning, tried to engage him with questions. Stephen shrugged them off.

When you know the whole story, it's hard to believe that this was just two summers ago. 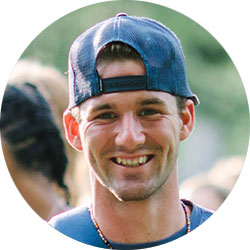 Jason, CCO campus ministry staff at Westside Church and Indian River College in Fort Pierce, Florida, kept up the questions after class. Something in his gut told him God wanted him to pursue Stephen, even as he wondered, “God, are you sure?” So Jason invited Stephen to get together one-on-one.

“I blew Jason off for three weeks,” Stephen remembers. “Then finally, I told him that I’d stop by in the morning before I went surfing. I wanted an excuse to get out of there as soon as possible.”

That meeting began a friendship based on surprising common ground. Stephen had been a record-breaking swimmer, Jason a star baseball player. Both could do nothing wrong—until their egos got out of control, until they fell in with the wrong crowds, until they made bad choices. Both had fallen hard and been left wondering, “Does anyone care anymore?”

Then Stephen totaled his car.

When it happened, he was just starting to consider "this God loves me stuff” that Jason kept telling him about. A month before Stephen and Jason had met, Stephen was sent to jail for selling marijuana, His dad left him there for two weeks. When he finally paid his bail, Stephen's dad had said to him, “Don’t tell anyone that you’re my son. I’ll get you out because you’re someone who needs help, but you’re not my son anymore.”

After Stephen wrecked his car, Jason started picking him up every day. “I saw it as an opportunity—even a sign from above—to disciple Stephen,” Jason remembers. He brought him to Bible studies and service opportunities. They kept talking. Jason kept praying.

Together they read the story of the Prodigal Son, and Stephen recognized himself in the story. He began to hear the words of God instead of just reading them. He felt the Holy Spirit’s work inside him and heard God say, “I love you.”

Stephen came home to this Father, not as a stranger, but as a beloved son.

Now Stephen sits in the chair across from the green loveseat where he landed two summers before. He is facilitating the Sunday morning Bible study for college students and young adults. Every Monday morning, he meets with Jason to talk about how it’s going and to pray for other students.

As they talk and pray, Stephen and Jason find they have even more in common. They are both growing in love for the Father who ran to them with open arms. And they both want to share the freedom they’ve found with others.

Join the mission to reach EVERY STUDENT for Christ.

When Jordan walked into Hope Church for a young adult event, her first thought was, “I don’t belong here.” So she kept a wide smile plastered to her face...